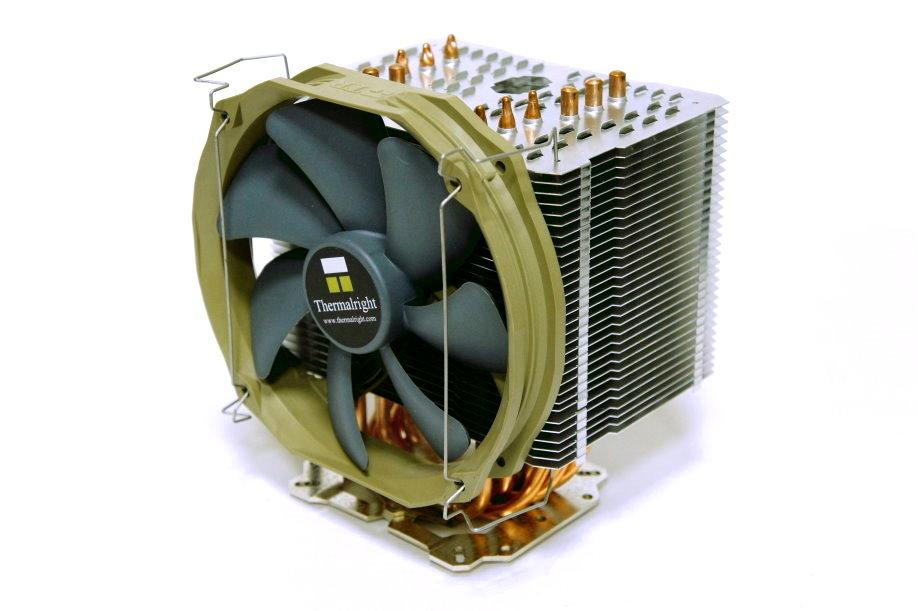 Today we will analyze a CPU heat sink by Thermalright: the HR-02 Macho. This is a giant heat sink that features a 140 mm fan. It has been created with the aim to further improve the good quality/price of the previous HR-02.

Thermalright is a leader in the market of dissipation for the components of personal computers, specialized in cooling solutions for CPUs, but has developed equally valid and even revolutionary heat sink solutions for GPU, RAM, chipset, MOSFET and other accessories. The main objective of Thermalright is to get the correct operating temperatures for the components of a personal computer. You need to have solutions with good design and minimal structural complexity, but characterized by a high know-how to get the correct temperatures in modern systems.

The HR-02 Macho was created with two very specific purposes:

1) replace the previous version, namely the HR-02, with a more economic to produce version, but with the same technical characteristics, potential, low noise. Fundamentally improve the price/performance ratio.

It's clear the research by Thermalright to offer a competitive and economic product, that can undermine the sales of integrated liquid solutions, generally more efficient but also more expensive. The dividing line was just the final price, and from this point of view Thermalright has done an exemplary job. The size of the heat sink itself and the introduction of a new 140mm fan allowed to imitate the excellent performance of heat dissipation of its predecessor, the HR02, all managing to keep costs amazingly low. 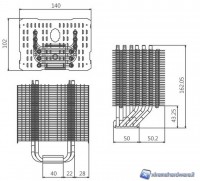 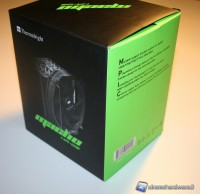 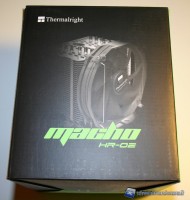 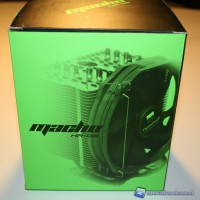 The box is essential, but unlike the previous models, it has been cured more, even in the pure aesthetic. We have the external box in black and bright green, which pictures the sink, but above all its new 140mm fan.

On the sides are the primary characteristics and other technical specifications.

The bundle is well maintained and there is also the thermal paste in the classic sealed bag; it would have been more comfortable in a tube. There is a very sturdy backplate and a good mounting system; the first impression is very positive. This solution, in fact, allow a high level attachment. 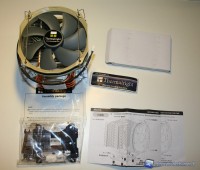 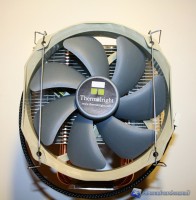 In addition to the heat sink with the fan pre-installed, we found inside the box: 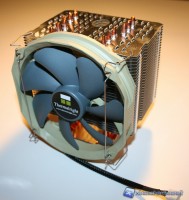 The Thermalright HR-02 Macho Cooler has 31 blades and a single dissipating body. It comes bundled with a 140mm fan with excellent performance and low overall noise, even at maximum rpm. The processing and final performance of the dissipating blades are unfortunately affected by the decision to offer a low-cost product; in fact, the blades themselves are not welded on either one another or heat pipes. This leads to a certainly lower overall performance, but, given the overall size, this does not affect significantly the efficiency. There are structural optimizations that lead to increase the dissipating surface area at same size, such as small vertical openings in the 31 horizontal fins and the center slot that serves both to the mounting and to create more ventilation and heat dissipation, isolating, in part, the two sets of heat pipes.

The base is well made, though not perfectly mirror lapped. Note the slight convexity, Thermalright proprietary feature that has been used in order to allow a better contact area. Unfortunately there are only two mounting brackets for a single 140mm fan; you can still buy them separately, as there are the mounting holes to create a push-pull system.

Interesting peculiarity of this model is that the base itself is significantly offset from the center of mass of the heat sink itself. This configuration adopted by Thermalright has two main benefits: one is the adoption of high-profile RAM, a solution that turns out to be very important during assembly, without compromising the installation of performing modules with aftermarket dissipation systems. The other clear advantage is the ability to exploit the extraction fan of the case, which comes to lie very close to the back of the sink. This makes setting up the HR-02 Macho also in "passive" mode, i.e. using only the fan of the case.

For the sake of completeness we report the link to the compatibility list drawn up by the same Thermalright the installation PDF for the AMD solutions and that for Intel solutions .

The installation procedure, in this case inherent to Intel systems, is very easy and fast. If you use a case with the opening behind the socket on the motherboard you need to enter first the backplate, and then put the spacers on the opposite side, namely the CPU, with the aim to temporarily block both the backplate itself, both to avoid damaging the motherboard during the installation. We must be careful to insert the screws in the correct slots for the various sockets; the holes at the end are typical of LGA 1366 systems while those closer to the center are those for LGA 775. So it is necessary to fix the second part of the mounting system itself, placing it above the spacers and then tighten the screws and lock it. After that you should spread a thin layer of thermal paste, we recommend the use of a hard surface like a credit card. Paved the thermal paste, now is the time to affix the heat sink itself, making sure to mount the fan facing the RAM, but it will be mounted later. We recommend you to perform this operation with the motherboard lying horizontally, so that there are not problems due to the weight of the heat sink and the force of gravity. Given the weight of 860g, we could have problems. Once terminated the positioning you have to fix the superior retention plate and tighten the two screws, being careful to insert the second one in the cavity in the center of the heat sink itself, we recommend using a screwdriver with magnetic and elongated head. At the end of this fast operation we proceed to mount the front fan: we must first put the two lateral brackets, inserting the end inside the small cavities in place, then affix the 140mm fan and finally lock it by pushing the ends of the brackets in the classic fan holes.

To finish we must connect the 4-pin PWM cable on the motherboard, in the area prepared for the CPU fan.

Unlike other solutions, the Macho does not have a system to balance the pressure on the CPU. Please note that you must use a very long head screwdriver, by 9.5 inches, preferably with a magnetic tip.

We tested the cooler on the following system, mounted both on an open bench both inside the newest Silverstone Raven 3 case (with two AP181 Air Penetrator fans set to full speed by the appropriate regulator to make the most of the chimney effect), with an ambient temperature of about 25°C.

In the Raven 3 a GTX 480 was used instead of the 5450 and a 700w Xigmatek power supply. Recall that the Silverstone Raven 3 case is characterized by the positioning of the motherboard into a 90 degrees clockwise rotated position, so that the air flow is more linear and that the "chimney" effect is exploited.

We chose to use a Core i7 920 revision D0 CPU because it can properly put stress on the heat sink, thanks to its TDP of around 130W at default. The temperatures were compared with those of the Noctua NH-C14, the newest Scythe Mugen3 and the newcomer Scythe Kozuti, a very interesting and of new concept low-profile cooler. The other heat sinks were tested only at the banquet.

We measured the temperatures at idle and full load with the Realtemp software. The temperature at full load were measured after 25 minutes of Prime95 stress "InPlaceLargeFFTs" (maximum stress and consumption), benchmark known for its ability to heavily stress the CPU, much more than any video game.

With regard to measurements, they were performed with fan speed set to a minimum and maximum speed, using the BIOS settings specifically on silent (1050/1100 rpm) and turbo (1250/1300 rpm); in addition to this we used the sink also in fanless configuration, within the Raven 3. The thermal paste used is Arctic Cooling MX-4.

We used three different test sessions, with the following frequencies:

As we can infer from the graph it is clear that we have a product capable of achieving excellent operating temperatures. We were really surprised to see that this brand new heat sink held off with an Intel Core i7 920 with well 130w TDP in a fanless configuration! This result is very remarkable. As you can see, the adoption of the bundled 140mm fan reduces the temperatures by well 13 Celsius degrees, all in silence. With the processor overclocked to 3.4 GHz, the situation starts to get complicated with a fanless configuration, otherwise if we use the fan it changes a little. Finally, at 4GHz the Macho still managed to achieve excellent temperatures being silent. These results leave no room for a lot of comments, they are undoubtedly very good performances. 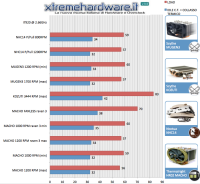 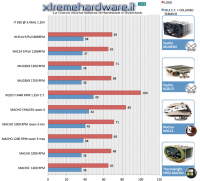 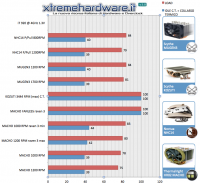 From the standpoint of noise, we can say that it is practically nil. Here too the Thermalright HR-02 Macho behaved flawlessly.

As planned, you can install another fan in a push-pull configuration and we report that doing so it will improve temperatures of even 3-4 Celsius degrees. Unfortunately there are not additional bundled brackets so you will need to strive differently, for example through the adoption of clamps or brackets for assembly of different kinds and sizes. Generally, this configuration can be obtained simply by taking advantage of the rear fan installed in most cases.

We are with a really superb product. It's cheap, it's capable to deal with a Core i7 920 in overclocking; it's huge so it gives you that feeling of security such that you even can uninstall programs dedicated to monitoring temperatures; is equipped with everything you need, including a 140mm fan. As for the price, in Italy is not yet officially released but you can find it in European stores from 38 Euros including VAT. In Italy it is possible that the price will be slightly higher, however, the price-performance ratio is exceptional. 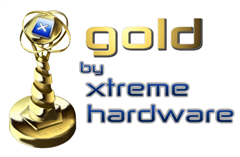 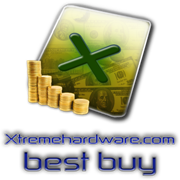 We thank Thermalright for the product supplied to us for testing.